The Different Types of Carabiners

A carabiner is a metal shackle used to connect and hold objects together. It is simple to use. You open the spring-loaded gate and attach it to the object’s loop. Then you let go to secure the connection. Some carabiners are solid and are used by mountain climbers, firefighters, sailors, technicians, and construction workers.

There are many types of tactical carabiners that you can buy. The carabiner’s gate and shape can significantly affect what you choose to bring with you. Each type of carabiner is designed for a different situation. Using a suitable carabiner is very important when your life is on the line.

Table Of Contents
The Different Types of Carabiners
Best Metal Detector For Gold
Different Shapes of Carabiners
Straight Gate (Non-Locking)
Carabiners Used in Climbing: Comprehensive Guide
What Is a Carabiner?
Carabiner Weight, Strength, and Size
Which Is the Best Carabiner to Use
Frequently Asked Questions About Carabiner Types

Are you hoping to unearth some hidden gems during your next treasure hunt? Using a high-quality metal detector is the best way to do this. Not every metal detector can recognize precious metals, but plenty of great ones are on the market.

Here is a list of the best metal detectors for finding gold.

A triple-action gate requires three motions to unlock the carabiner. These three gestures are 1) moving the sleeve up or down, 2) rotating the sleeve manually, and 3) drawing the lock inward—the carabiner locks when you release it automatically.

To release a double-action auto-lock gate, you need to do two things. First, rotate the sleeve by hand. Second, pull the lock inward. Once you release the lock, it will automatically secure itself again.

Wiregate carabiners have a stainless-steel wire loop for the gate. It reduces the weight and makes it easier to operate. Wiregate carabiners also have a larger gate opening and are less likely to freeze in cold temperatures. Some people worry that wire gates aren’t as strong as other types of carabiners. But this isn’t true because of the lower mass in the gate itself. It makes them less likely to vibrate during a fall.

The carabiner you choose for your next climbing trip will depend on what kind of climbing you are doing. You need to consider why the carabiner is shaped a certain way and its strength, size, and load limit. U.S. Rigging Supply is a great place to start if you are looking for a good selection of carabiners. They make some high-quality and reliable carabiners.

Be responsible and only buy high-quality, heavy-duty carabiners designed for your climbing activity. These simple metal shackles can greatly impact your safety and ability. Carabiners are some of the most important tools to bring along on your climbing adventures.

Using an appropriate carabiner is of the utmost significance when it is critical to maintaining one’s safety. Carabiners are used to going up and down safely. There are different carabiners for climbing, and it is necessary to choose the right one.

If you’re looking for a carabiner, this guide can help. You will know what to look for and how to select a carabiner from the information provided.

What Is a Carabiner?

A carabiner is a metal shackle that is used to connect objects. It is a simple and handy tool. You can open the spring-loaded gate and attach it to the object’s loop. When you are done, release it to connect securely. Carabiners can be used for many things, like sailors, firefighters rappelling, technicians, and mountain climbers.

Why Choose a Suitable Carabiner?

There are many different types of carabiners. It can make it hard to choose the right one. But it is essential to understand them before you buy one. There are some things you should think about before going out and purchasing a carabiner, such as the following:

When selecting a carabiner, there are numerous factors to consider. Even though all carabiners use the exact primary mechanism, they are designed for different purposes. Here’s what you need to know when making the best choice.

There are different sizes of Carabiners. The large Carabiners are easier to use and can hold more gear. They are popularly used with rappel and belay devices. The smaller Carabiners are lighter and take up less space, but they can be harder to clip.

When looking at different carabiners, check the Gate Open Clearance. It is a metric that tells you how wide the carabiner gate can open. It’s also essential to look at the shape and depth of the Carabiner’s bottom.

The less a carabiner weighs, the easier it is to use. But sometimes, a lighter carabiner might not be the best option. For example, a smaller, super lightweight Carabiner can be more challenging when you clip a bolt or a rope.

Narrower carabiners are not as strong as bigger ones. It is because they are made from thinner metal rods. They also have a smaller gate opening, making it challenging to put ropes through them.

A Suitable Carabiner Should Have CE and UIAA Strength Standards

When choosing your Carabiner, finding the right weight and size is essential. You also want to make sure that it is solid. However, you should be aware that while lighter, smaller carabiners are weaker than heavy, large ones, this is not always the case.

You should watch out for gate lash as it reduces the strength of your Carabiner and increases the risk of it breaking. The inertia of the gate’s gate causes gate lash since it can overcome the tension of the retaining spring. Additionally, it can happen from the tool’s gate colliding with an object.

You can prevent this issue by utilizing a gate with a specialized design (such as a wire gate) or a carabiner with stiff spring tension. Make sure to consult an experienced REI professional before making your decision.

Which Is the Best Carabiner to Use

Carabiners come in different sizes and weights, each suited for a particular purpose. For instance, large and heavy carabiners are suitable for clipping heavy gear and maintaining balance during a climb.

It does not apply to small wire gate carabiners. Which are ideal for attaching equipment and keeping your rack a little less heavy; they tend to limit the amount of gear you can carry around.

For starters, below are a few recommendations:

After looking at different carabiners and finding the right type for what you need, go to your local climbers’ shop. You can try out a few different designs and see how well their gates work. You should also check how efficiently they clip and unclip and how they feel when you wear them. Make sure to choose carabiners that are easy to operate and perform well. 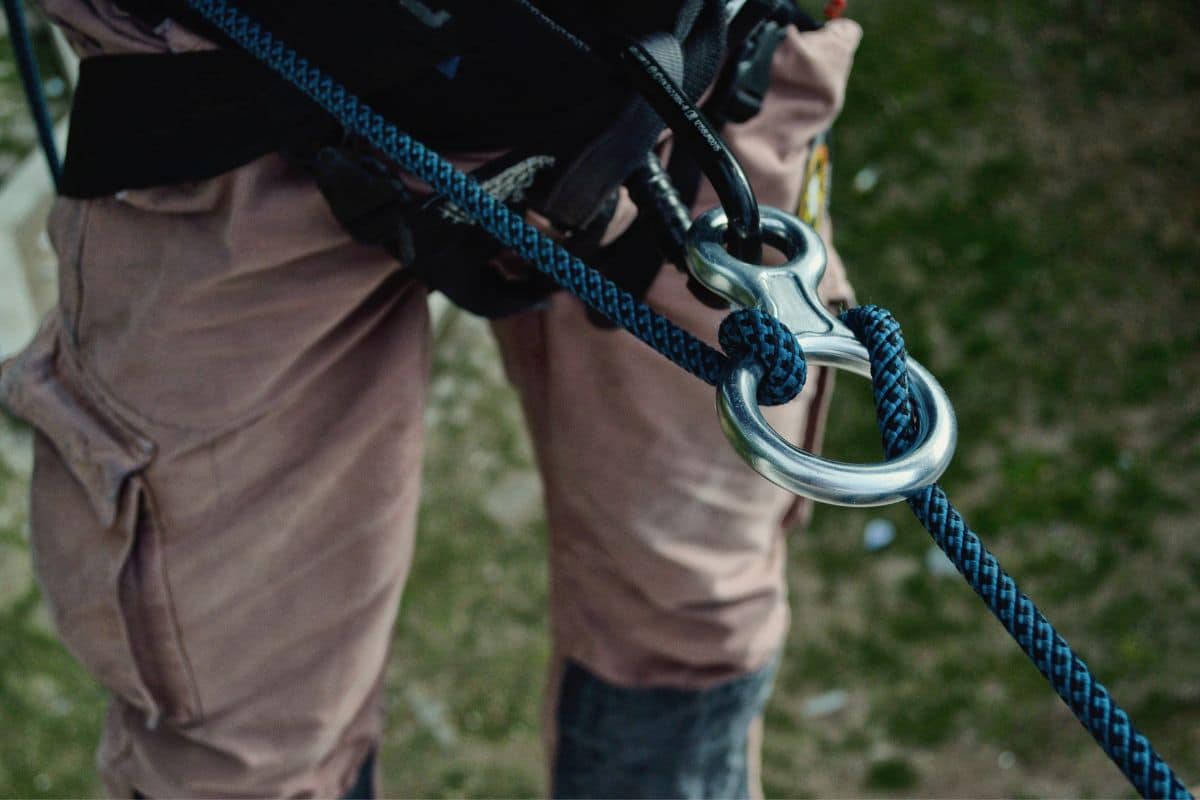 What Else Are Carabiners Called?

Carabiners are also dubbed “crabs” A fingertip opens the spring-tensioned gate. It makes it easy to clip it onto climbing gear like a rope. Usually, the spring inside the carabiner holds the gate closed.

Why Do Carabiners Say Not for Climbing?

Carabiner keyrings and other light-use clips have become popular. They are usually stamped with a warning that they are not for climbing because they often do not meet safety standards for manufacturing.

What Is a Double Locking Carabiner?

A tree climber’s carabiners must be “self-closing and self-locking.” It means that the carabiner must require three distinct motions to open the gate and that it will auto-close and auto-lock when the gate is released.